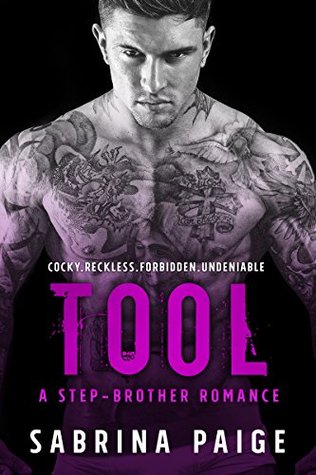 Gaige O’Neal is nicknamed “Tool” because of what he’s packing. Rumor is that he’s well equipped.

He’s a cocky, entitled, insufferable a**hole who’s as reckless with women as he is with that stupid motorcycle he races.

It’s been four years since I’ve seen him. Four years ago, he was the bane of my existence. And my best friend, my biggest confidant, my first love.

It’s just my f**ing luck that the first time I see him in four years, he’s buried beneath three scantily clad blondes.

Now I’m stuck here under the same roof with him while he recovers from a racing injury. An injury that clearly hasn’t affected the use of his tool.

The problem is, as much as I despise him, I just can’t help myself. I want to find out what kind of tool he’s working with.

I much preferred the first in the series, this book fell flat for me. This story has been done many times before, and it lacked anything that made it stand out from the crowd.
There are better step-sibling romances I suggest you find one of them. I won’t be continuing the series as its the same story with different names