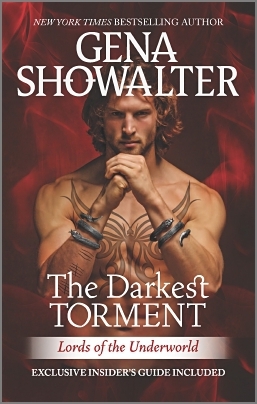 Driven to his death by the demon of Distrust, Baden spent centuries in purgatory. Now he’s back, but at what cost? Bound to the king of the underworld, an even darker force, he’s unable to withstand the touch of another and he’s quickly devolving into a heartless assassin with an uncontrollable temper. Things only get worse when a mission goes awry and he finds himself saddled with a bride just not his own.

Famed dog trainer Katarina Joelle is forced to marry a monster to protect her loved ones. When she’s taken hostage by the ruthless, beautiful Baden immediately after the ceremony, she’s plunged into a war between two evils with a protector more dangerous than the monsters he hunts. They are meant to be enemies, but neither can resist the passion burning between them and all too soon the biggest threat is to her heart.

But as Baden slips deeper into the abyss, she’ll have to teach him to love or lose him forever.

I truly do not understand the hate this series is getting lately. I love the new change of direction. A series as long as this can become stale and unenjoyable so when an author takes it in a new direction and breathes fresh air into it, then I’m ecstatic. Series can become repetitive if nothing changes and I love how this universe is expanding and growing.

I am a huge animal lover and I can completely understand Katarina’s motivation to protect her babies. I love her interactions with dogs. I am a huge fan of the Underworld. I always have been and I am loving this interpretation.

I was never too interested in Baden. He was dead for most of the series and I have become heavily invested in other characters who’s stories hadn’t been told yet but I ended up really enjoying his development.  He suffered the most because of his demon possession. IMagine not being able to trust the people you love. forever having a voice whispering in your ear that you can’t trust anyone that they are out to get you. For Baden, death was the only peace he could hope to get. Now he has a second chance but he is still very damaged by all he has suffered.

This series just keeps getting better. I love it and can’t wait to get my hands on more.