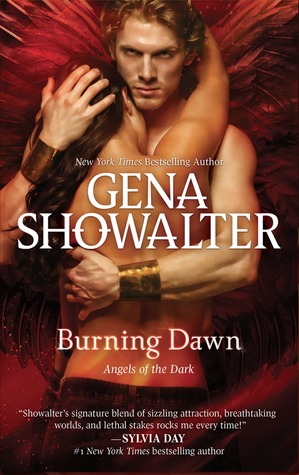 A tormented past has left Thane with an insatiable need for violence, making him the most dangerous assassin in the skies.
He lives by a single code: no mercy. And as he unleashes his fury on his most recent captor, he learns no battle could have prepared him for the slave he rescues from his enemy’s clutches—a beauty who stokes the fires of his darkest desires.

Elin Vale has her own deep-rooted scars, and her attraction to the exquisite warrior who freed her challenges her every boundary.
But Thane’s unwavering determination to protect her means she must face her greatest fears—and enter a world in which passion is power, and victory means breathtaking surrender.

This book could have been better. Elin was somewhat immature. I am holding this author to a higher standard. from another author this would have been a five star read but I know Ms Showalter can do better. This is the last in the Angel of the Dark series as the author has said she is now going to include the characters in the Lord of the Underworld series fully instead of being an offshoot.