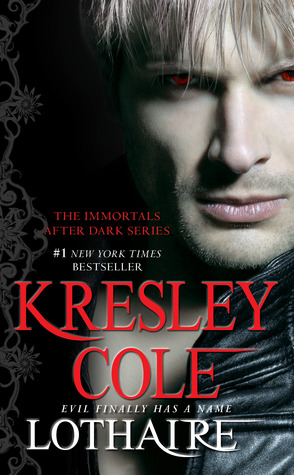 All fear the enemy of old.

Driven by his insatiable need for revenge, Lothaire, the Lore’s most ruthless vampire, plots to seize the Horde’s crown. But bloodlust and torture have left him on the brink of madness—until he finds Elizabeth Peirce, the key to his victory. He captures the unique young mortal, intending to offer up her very soul in exchange for power, yet Elizabeth soothes his tormented mind and awakens within him emotions Lothaire believed he could no longer experience.

A deadly force dwells within her.

Growing up in desperate poverty, Ellie Peirce yearned for a better life, never imagining she’d be convicted of murder—or that an evil immortal would abduct her from death row. But Lothaire is no savior, as he himself plans to sacrifice Ellie in one month’s time. And yet the vampire seems to ache for her touch, showering her with wealth and sexual pleasure. In a bid to save her soul, Ellie surrenders her body to the wicked vampire, while vowing to protect her heart.

Elizabeth tempts Lothaire beyond reason, as only his fated mate could. As the month draws to a close, he must choose between a millennia-old blood vendetta and his irresistible prisoner. Will Lothaire succumb to the miseries of his past—or risk everything for a future with her?

Immortals after dark is my all-time favourite series. Aside from Nix i have long found Lothaire to be an interesting character and couldn’t wait to read his book. throughout the series it is difficult to decide where Lothaire falls on the bad guy rating. With this book we discover his backstory and his reasons for threading the slim line between bad and evil.

I loved that the person destined to be his bride is a human, and a redneck hillbilly at that. I have reread this book several times and each time I can’t put it down. The characters are so rich and my heart breaks each time for Elizabeth. She suffers horrifically at the hands of the evil goddess inside her, her young life spent trapped behind bars and now she is being held by a red eyed monster of myth who plans on destroying her soul.

This book is richly detailed and off the charts hot. if you haven’t read this series yet then i don’t think you can call yourself a fan of paranormal romance/ urban fantasy. Get out there and give this series a go.