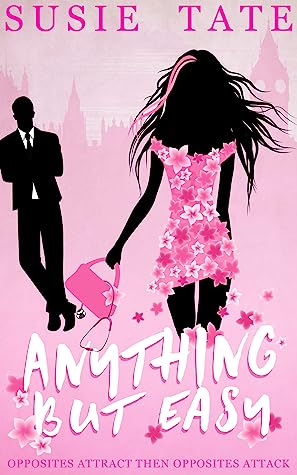 Kira Murphy is a liability: always has been. She might be small, but her personality and heart are not: a sexual health doctor with a foul mouth, pink streaks in her hair, a bizarre world view, a reputation for being ‘pathologically social’, and a huge crush on the current Minister of State for Business, Energy and Clean Growth . . . she’s weird and lovable in equal measure.

The last thing Barclay Lucas needs is a liability. He’s made it into the cabinet with single-minded determination, sheer grit, and serious conservatism. But then a crazy, pink-haired, tiny dynamo turns his life upside-down and serious for Barclay is a thing of the past.

But he’s never liked feeling out of control – something he experiences with Kira on a daily basis. So he pushes her away when she needs him the most, and unfortunately for him, she retreats at head-spinning speed. It’s only then he realizes that although being with Kira is anything but easy, the grey, boring alternative is far worse. He’ll have to use all his hard-earned political negotiating and maneuvering skills to get her back. Because after being dragged from black and white into full Technicolor with Kira, Barclay knows that, however serious and worthy his life is, he can’t live it without her.

This book made me laugh with the verbal sparing and over the top eccentricities of our heroine. It also tackles serious subject matter, in particular, HIV, destigmatizing it and providing accurate information and showing you can live a normal life. We see our hero’s brother coming to terms with his diagnoses and reestablishing a happy life for himself. From the accurate medical portrayal and health information, its clear the author is in the medical field (she’s a GP).

Minor issues I had were with the odd nicknames Kira uses and her turn of phrase was annoying at times. She was also a little too out there in her eccentricities, but I can’t say I haven’t met similar. Some doctors and nurses do dress and act similar to her and no one bats an eye really.

The sexual harassment that Kira deals with and her fears for repercussions are accurate. It is too common for the victim to be blamed if they are in a subordinate position. It is an unfortunate reality that people cannot speak up against wrongdoing in health care as the providers will punish the whistleblower. I applaud the author for highlighting this issue. I only wish it were a tool used to create drama and not reality.

This was a highly entertaining read, and I read it in one sitting. If your a fan of opposites attract romance with plenty of humour and touching drama, then this book is for you.