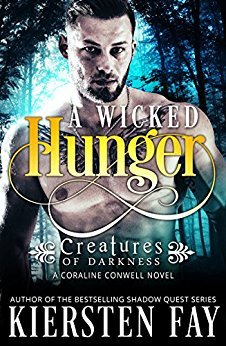 His kiss binds her in passion. Her kiss spurs an obsession.

Coraline mistrusts the many vampire clans that have been at war with humans for the last century, but when her husband is murdered right in front of her, she is thrust into the dark and dangerous world of the supernatural. And now she has a target on her back.

Against her better judgement, she must rely on a mysterious vampire named Mason to keep her safe as those who hunt her grow near. Little does she know, her desire for Mason will threaten to consume them both.

This book started off great, I was intrigued by the world our characters inhabit, its a world where vampires are out in the open and have their own law agency.  Cora was a weak character for me, but if I were ever to find myself enduring what she endured, then I’m sure I would have deep issues myself. The vampires are dark and mysterious, like all vampire characters, but they are well written, and I want to know more about them.

My issue is the ending, its a cliff hanger, I hate cliffhangers. I like to have some resolution in the story rather than waiting to find out what’s going on, I know its a series and the author wants to keep people hooked but a cliff hanger is frustrating for the reader.

I liked the story set up so I’m going to stick with this series, but I hope there isn’t another cliffhanger.