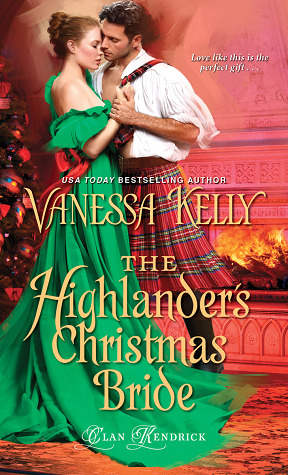 Being thrown over by the man she expected to marry was humiliating enough. Now that Donella Haddon, grandniece of the Earl of Riddick, has also proven a failure as a nun, she has no choice but to return to her family’s estate. The brawny Highlander sent to escort her is brash, handsome, and the only thing standing between Donella and a gang of would-be kidnappers. But the scandal in her past can’t be so easily outrun…

Wealthy widower Logan Kendrick was expecting to meet a plain, pious spinster—not a gorgeous, sharp-tongued lass who can hold her own in any ambush. Though she’s known as the Flower of Clan Graham, Donella is no shrinking violet. In fact, she might be the perfect woman to bring happiness back to his lonely little son’s life, just in time for Christmas.  But first he must protect her from ugly gossip and a mysterious threat—and convince her that their wild, unexpected desire is heaven sent.

While part of a series that features crossover of a large number of characters, this story can be read as a standalone.

For a book that starts with a lot of action, attempted kidnappings, being on the run etc. this book was incredibly boring. There were a large number of characters introduced and several unnecessary chapters that bogged down an already dull storyline.

I felt like there was forced chemistry between the two main characters, and while there are some steamy sex scenes, it feels like a happy for now ending not happily ever after. The main heroine was not in the least likeable, she was secretive, idiotic and whiny. Not characteristics I want in my heroine.

If you are a fan of the author then I’m sure you will enjoy this book, but it was a definite miss for me.