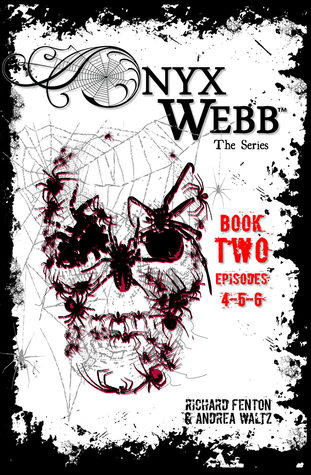 The Onyx Webb series follows the unusual life of Onyx Webb along with a central group of characters in various locations and times. Written like a book version of a supernatural soap opera, each character’s story moves forward with most every episode. It may appear that the characters are entirely unrelated and yet episode by episode, the connections will become clearer And this is especially true in Book Two. Like being an inch away from a spider web, with each book, the web will move further and further away revealing the full story of every character and most importantly, the stunning conclusion for Onyx Webb herself.
In Book Two…
It’s the 30’s and Declan Mulvaney and best friend Tommy Bilazzo learn to survive at the Open Arms Orphanage despite the adults who run the place. It’s 2010, and Koda Mulvaney is insane trying to see the girl in the mirror again. Onyx Webb finds herself living all over the country married to the crazy German, Ulrich, with no way out.

We pick up right where we left off in the previous series. The cast of characters is more extensive, and the individual stories begin to weave together with chance encounters with other main characters. This is not for the faint-hearted as the characters continue to experience the harsher aspects of life.

The writers have a gift for creating emotional bonds with the characters in a relatively short space of time. The timelines are so skillfully intermingled that you never lose track.
I read this instalment in one sitting, and I’m anxiously awaiting the next instalment. This is definitely a unique series. This is not my typical type of book, I prefer more romance and happy endings, but I have to say this is fast becoming one of my favourite series.