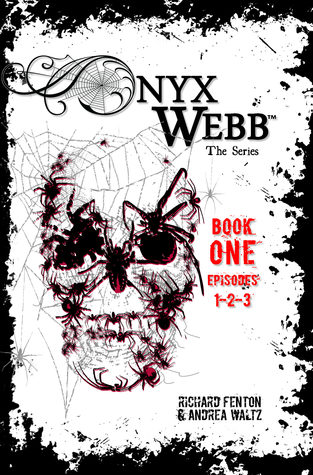 Onyx Webb is a multi-genre mash-up that combines supernatural suspense, crime, horror, romance, and more. So the story… Onyx Webb is a ghost. Billionaire playboy Koda Mulvaney becomes obsessed with a girl he sees inside a mirror. Juniper Cole is on her way to the prom and… well, we don’t want to spoil anything – we’ve probably told you too much already. How all these events are related is part of the mystery that is, Onyx Webb.

The Onyx Webb series follows the unusual life of Onyx Webb along with a central group of characters in various locations and times. The billionaire Mulvaney family, piano prodigy Juniper Cole and her brother Quinn, paranormal show hosts Cryer and Fudge, and a few others make up the core of the series. Written like a book version of a supernatural soap opera (think: American Horror Story) each character’s story moves forward with most every episode.

It may appear that the characters are entirely unrelated and yet episode by episode, the connections will become clearer. Like being an inch away from a spider web, with each book, the web will move further and further away revealing the full story of every character and most importantly, the stunning conclusion for Onyx Webb herself.

One thing to keep in mind is that this book reads like a tv show. We are introduced to different characters whose story occurs at different points in time from the 1920s to the present day. As in tv, the scenes change to different settings with no warning, which could be confusing for some, but I found I quite liked it.

We are introduced to three main characters in a pivotal time in their lives. Onyx Webb – the titular character is the first character to be introduced. We meet Onyx at 6 years old in 1904, and we return to her at different periods in her life up to her thirties.
Juniper is a child prodigy, and her story focuses on her prom night and the days that follow in the 1980s.

Finally, we are introduced to Koda, a billionaire playboy in the present day who is ordered by his father to become a responsible adult and work for his money.
I enjoyed the first two episodes in the book. I enjoyed the pace of the storytelling. The third episode I felt was overloaded with new characters that didn’t really add to the story. We are given hints of how the main characters will link together, and I’m looking forward to how it develops.

This book fits into so many different genres, making it hard to define. There are aspects of supernatural, thriller, drama. Mixed together, they make for an intriguing read that will keep you hooked and leave you wanting more.

I received this book in exchange for an honest review