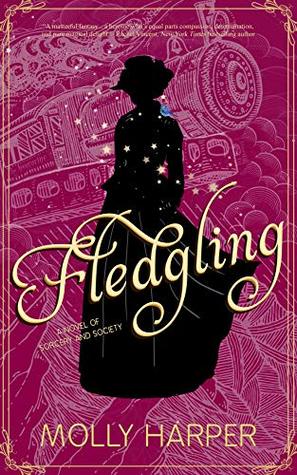 Days away from becoming completing her first year at Miss Castwell’s Institute for the Magical Instruction of Young Ladies, Changeling-born Sarah Smith might just get away with posing as an upper-class Guardian girl named Cassandra Reed.

But strange visions of a Lightbourne destroyed by Miss Morton’s revenant army keep Sarah from enjoying her achievement. Plus, the Mother Book, Sarah’s one secret advantage and the ultimate entrée in Guardian society, suddenly stops revealing itself to her…putting her in a precarious position with the Guild. On top of all that, her former lady’s maid left Miss Castwell’s, and the new hire is, well, taking some getting used to.

If it weren’t for her two best friends, Alicia McCray and Ivy Cowel, who will do anything to protect her secret, Sarah doesn’t know if she’ll make it another year. When the three girls take summer holiday with Alicia’s family (chaperoned by an exacting and very disapproving Mrs. McCray), a relaxing vacation in Scotland is the last thing they’ll find.

Mrs. Winter is thrilled that Sarah is spending time with the influential McCray family, but Sarah can’t help but feel that her real purpose is to find other Changeling children like her, and free them to realize their own magic. Can she find genuine satisfaction in her accomplishments when she knows there are others like her out there who need her help? Will the three girls uncover the deeply-held secrets they’re looking for in the mysterious mountains of Scotland? Will the Mother Book finally start talking to her again? And will Sarah come to understand the importance of her connection with Ivy and Alicia, and the true nature of her own power…before it’s too late?

The second instalment in this series sees Sarah/Cassandra beginning her journey to find other children like her.  We are still discovering more about the world that Sarah lives in, and the characters are evolving and growing. The humour that made me fall in love with the first book is very much a part of this world. Alicia is still my favourite character with her acerbic one-liners.  Mrs Winters is also given more depth in this book. She is not the cold woman we initially meet in Changeling. She is a woman of great depth who is an expert at navigating the many pitfalls that society throws her way.

Ms Harper is a skilled writer, but this series is her first foray into the historical setting. While set in an alternate reality, the rules are the same, women are chaperoned, arranged marriages are the norm, the clothing is the same. Ms Harper has done her research, and it shows. Many books I’ve read that uses a historical setting, especially in fantasy make the characters too modern, this isn’t the case here, the story fits the period.  Ms Harper has crafted strong female characters who fit in the period they inhabit, this is no mean feat.

This book also suffers from copy editing issues that were prevalent in the first book. Dropped sentences, repeating words. This time I read the arc, so I hope they will be rectified but given the issues were found in the published version of the first book, I expect they will still be there,

I received an arc of this book via Netgalley in exchange for an honest review. All thoughts and opinions are my own.